One of the problems I see a lot with my students is the inability to understand when they are "sitting in their hip", or if they do realize it, they aren't sure how to correct it.  For a lot of dancers, sitting in the supporting side hip happens when they are concentrating on a combination, fatigued, or trying to keep their hips square (but trying the wrong thing).

If students develop a strong supporting side and are working on it consistently, muscle memory will often kick in to help them sustain it during times of concentration in other areas, but this sounds a lot more simplistic than it's execution in the real world.  In the long run, it's much easier to prevent a bad movement pattern from being ingrained, then it is to correct a faulty pattern that a dancer has been allowed to get away with for long periods of time.  I start working on the concept of a strong supporting side from a young age - I just don't always call it that.

Here are some ways you can increase the awareness of the supporting side in all of your classes:

1.  Unilateral movements are great, especially once students realize that each side is a little bit different and learns how to work them appropriately.  Completing all of the repetitions of the movement on one side before switching to the other side will help with strength development.  Alternating movements from side to side with minimal adjustment will help with stabilization.

2.  Alternate your starting side week by week.  Not only has it been shown that your brain works differently on the side you learn a movement (or combination on), but the side that the exercise is introduced on will often get more repetitions of the movement due to marking and other movement based ways of learning the exercise.  This will change the work done by both the supporting and gesture sides.

3.  Correct students whenever you see them sinking on their supporting side.  Yes, it gets tiresome for all involved, but if you think about how many other things the students are thinking about, they might not even realize there is a shift going on.

4.  If you are working on the supporting side as a focus for the class, keep the exercises simple so that they can focus on the work.

5.  Try a new cue, instead of lift out of your standing/ supporting leg (which often causes students to hip hike), ask them to lengthen the back of their leg into the floor or heel.  This is not to be confused with back weighting, but instead encourages an active engagement around the hip which will often re-set the pelvis in the proper alignment.

6.  Try some of these barre exercises, adapted with a resistance band to focus the attention on the supporting leg. 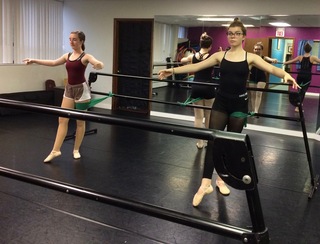 For the exercises shown, knot the tails of the resistance band so that they are being held in place without slipping.  Place the side with the knot over the barre and then pass the loop around the barre and through it to lock it in place.  The dancer then steps into the loop and moves away from the barre until there is a little bit of tension in the band.  If the barre is to the side of the body, the focus will be on the lateral muscles of the leg needing to stay active.  If the barre is behind the body, the focus will be more on staying pulled up through the front of the hip area and maintaining the forward weight on the foot.  This is also a great way to help students who hyperextend learn the muscle engagement needed for a straight supporting leg without hyperextending.

1.  Tendus from 1st en croix. Works well with back or side to the barre. 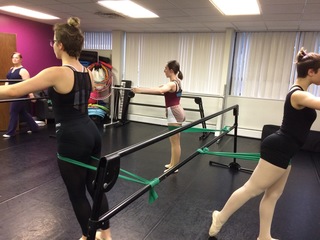 2.  Degagé from 1st en croix. Works well with back or side to the barre.

3.  Ronds de jambe in both directions.  Works well with back or side to the barre.

4.  Frappé / petits battement.  Works well with back or side to the barre.

5.  Fondu. Worked better with the side to the barre and the band on the gesture ankle, keeping the movement at about 45 degrees.

6.  Port de bras / cambré - Worked better with back to the barre. 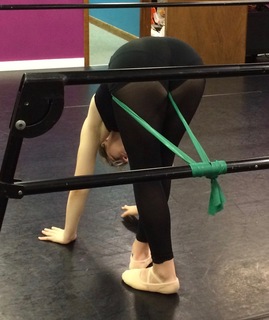 Some general things to watch for:

- Hinging the torso forward instead of maintaining the proper alignment of the body.

- Select a barre height that provides a fairly level pull of resistance.  This also will have to do with where on the thigh the band is placed.

- If you have portable barres (as I did in these pictures), the students need to be placed to counter balance each other.

- If you are doing any kind of fondu, developpé, relevé lent, type of movement and have the band on the gesture side, placing it on the ankle will cause the band to have some rolling, but will avoid the tendency to sickle that comes from placing it on the foot.

- If you are doing any higher extension type work with the supporting leg staying straight, having the band on the supporting side from either the side or the back works well. 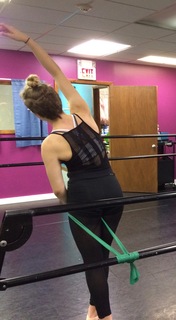 Enjoy, but do remember that the additional resistance will cause the students to fatigue sooner than if there was no band present.  Start by introducing a couple of exercises before going through more of the barre with the band in use.

When moving to the center, remember that the students muscles maybe fatigued in a different way than from normal barre.  Focus on exercises that will help them with stability and weight transfers to see where they are at before moving into more challenging turn or jump combinations.