Currently we are thoroughly watching over the situation in Ukraine and trying to support the brave and unstoppable spirit of Ukrainian nation in fight against Russian invasion by donating to the official resources provided by the Government. NING is standing with Ukraine in this fight for freedom and independence and if you want to show your support you can donate here.
Слава Україні! Героям Слава! 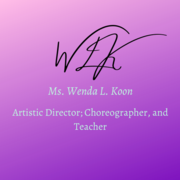 Biography---- Ms. Koon, a native Houstonian, begun her dance career studying different discplines such as ballet {Ceccetti and French methods}, pointe, tap, jazz, and lyrical. At the age of seventeen, choreography became a fascination to her. Ms. Koon has performed with Southwest Jazz Ballet, NuDance, Houston Metropolitan Dance Company (special performance}, City Dance Company/Studio, Dancer Enterprise Dance Company, and Resurrection Dance Company; RDC. Ms. Koon served as resident choreographer choreographer for City Dance Senior Company for the 1999-2000 season. Additionally, she has choroegraphed and directed four independent concerts ranging 2000 thru 2003. Also, Ms. Koon's choreography has been set on individuals for Rita Brosh School of Dance, City Dance Studio, and more. As a director, Ms. Koon served as the City Dance Junior Company Director for the 2000-2001 season. Also, she was Artistic Director for Dancer Enterprise Dance Company, and is currentlydirecting Resurrection Dance Company; RDC. Additionally, she has served on faculties such as Rita Brosh, City Dance Studio, Connolly Dance Arts, Shana's Dance Place where she taught different dance discplines such as ballet, pointe, tap, jazz, and hip hop. Outside of the dance world, Ms. Koon was the co-owner of Marshall Investigation and Security Agency from 2000-2004. Before that she served as a communcations operator from 1990 until the passing of her father, Thomas David Koon in November of 2000. Ms. Koon is also the Owner/Director of Dancer Enterprise. Ms. Koon did reside in Kingwood, Texas for a short time; but has relocated to Houston, Texas.

You need to be a member of DanceArt.com to add comments!

This reply was deleted.