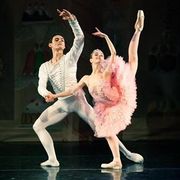 Valentina Kozlova, former principal dancer with the Bolshoi Ballet and New York City Ballet, presents her Dance Conservatory in "Nutcracker Winter Suite," a one-hour production that starts with the Snow Scene. The talented Dance Conservatory students will be joined by Kozlova students Nikita Boris and Justin Valentine as the Sugar Plum Fairy and her Cavalier. Both gifted teens received scholarships at the last Kozlova Int'l Ballet Competition to study at the legendary Vaganova Ballet Academy in St. Petersburg, Russia, directed by Nikolai Tsisaridze.  16-year old Nikita was further honored with an invitation to dance a solo from the ballet Giselle on stage at the Mariinsky Theatre as part of the Vaganova-Prix.